Do You Know the Dangers of Asbestos? Asbestos Awareness Month

We were previously unaware of the dangers that asbestos posed to our health. Once it was a popular product in manufactured goods and building materials, and it was the perfect material. It was flexible and strong, widely available and affordable, resistant to chemicals, water and electricity, it provided heat and sound insulation, and it had excellent fire resistance. But then we found out that asbestos is very fibrous, and those microscopic, little fibres are easily breathed in where they become trapped in the lungs. These fibres cause damage over time and can cause more serious complications like asbestosis (a chronic lung disease), lung cancer and mesothelioma (an aggressive, deadly form of cancer affecting the mesothelial cells, which is a slippery protective surface covering the lungs, chest wall, diaphragm, heart and inside the abdomen). Symptoms can take around 20 to 30 years to show after exposure and it can take on average 45 years to develop into mesothelioma.

Asbestos was very popular in Australia. Up until 1987, we had the highest rates of asbestos use per person – we mined it up until 1983 and imported 1.5 million tonnes of asbestos between 1930 and 1983. Unfortunately, due to the popularity in Australia, it also means we have one of the highest rates of mesothelioma. On average, an estimated 700 people die from mesothelioma and 4,000 die from asbestos-related diseases annually, which is four times the annual road death toll. It is approximated that 30% of lung cancer deaths are caused due to past exposure to asbestos. World-wide deaths caused by work-related exposure to asbestos was estimated at 219,000 deaths in 2016 and it was the culprit for 80% of all work-related cancer deaths in Australasia, Western Europe, North America and Asia Pacifica regions. (Systematic analyses of the 2016 GBD study published February 2020).

Fortunately, asbestos was completely banned in Australia on 31st December 2003. Although mining of asbestos and various regulations on asbestos were put in place, up until 2003 asbestos was still being imported and used. Even our cars had asbestos in them! It is safe to say that vehicles manufactured before January 2004 contain asbestos in the gaskets and brake and clutch lining. They are safe to drive, but DIY maintenance should not be undertaken as you could disturb the asbestos. Although we made a huge change and banned asbestos, unfortunately death from asbestos related diseases and cancers will continue for the next four to five decades, even if we managed to eliminate asbestos entirely. 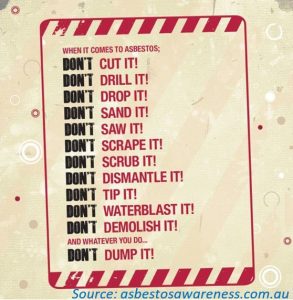 Now days, the biggest risk of exposure to asbestos is in the home – to homeowners doing DIY renovations in older homes or unsuspecting occupants with degrading asbestos, which means more chance of it becoming friable and releasing those dangerous fibres into the air. Over 3,000 products had asbestos in it and there is approximately 6.4 million tonnes of asbestos still in buildings and homes today. These products are as old as 100 years to as little as 30 years old and are still present in many houses throughout Australia. We have roughly one third of homes containing asbestos products, anything built before 1990 will most likely have asbestos. 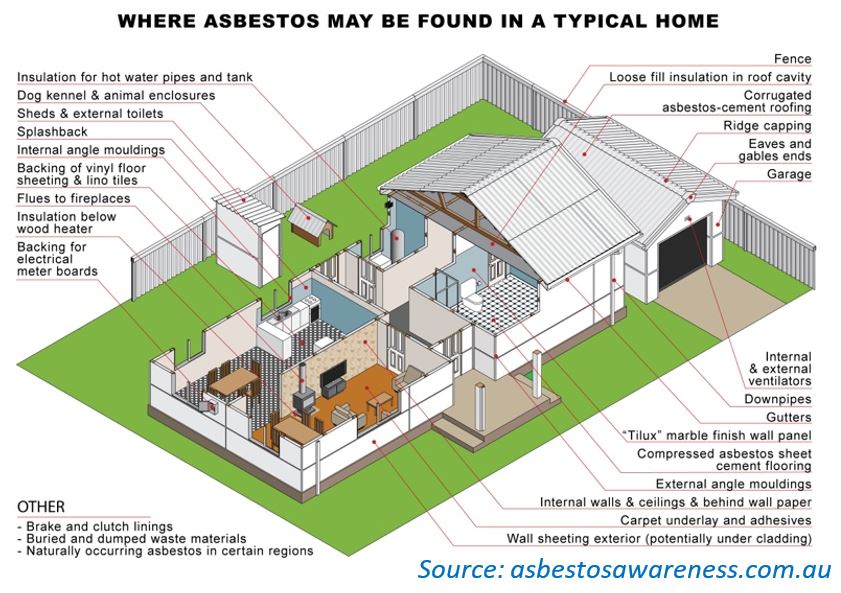 Asbestos can be found in many products and areas including:

In Australia, we have a record of individuals who have had possible exposure to asbestos for helping to provide detailed and accurate information at the time so in the future if they develop an asbestos related illness, they have accurate information, as asbestos has a long latency period and essential details may be forgotten. If you believe you may have been exposed to asbestos, whether in your home, at work, or your community, you can register your details here.

Ultimately, there is no safe level of exposure to asbestos. We need to be aware of the dangers of exposure to asbestos, the risks involved, where we might find asbestos and we need to be vigilant of possible degradation of asbestos in our homes. Our Online Asbestos Awareness Course is suitable for any tradie who might come across asbestos in their line of work (electricians, plumbers, bathroom and kitchen renovators, amongst others) or even DIY renovators who want to keep themselves safe from the risks of asbestos exposure.